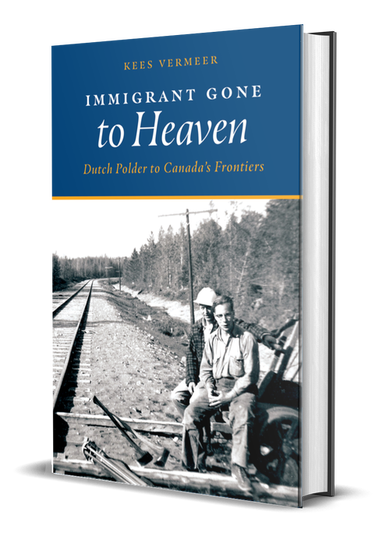 Immigrant Gone to Heaven is a remarkable book. It grips the reader from the moment the author joins an Emigration Training Centre in the Biesbosch region of the Netherlands with the goal of moving to Canada. We follow his experiences as he lands in Canada and works his way up from farm-hand to obtaining a doctorate in Zoology. The section of the book detailing his explorations in ornithology are as fascinating as the stories of immigration and the memories of World War II. The book takes the reader on a riveting journey of exploration in many facets of social history and science as viewed through the lens of an inquisitive and always optimistic upbeat man. I strongly recommend this book to anyone interested in learning more about World War II, immigration, bird behavior or even just in how a life’s journey can unfold with all its unexpected twists and turns." --Tom Bijvoet, Publisher, DUTCH the Magazine – Maandblad de krant

Brimming with charming personal anecdotes and fascinating ornithological research in equal measure, Kees Vermeer's Immigrant Gone to Heaven paints a vivid picture of an adventurous and fearless life. Vermeer’s curiosity and insight into the natural world are evident from his descriptions of childhood nest-hunting in the Dutch polder, to his pioneering work with seabirds on British Columbia’s windswept Triangle Island. His stories of everyday life under Nazi occupation are enthralling in their own right. Naturalists, scientists and history buffs alike will enjoy this book." --Annie McLeod, Editor of Nature Saskatchewan's Blue Jay

In 1930, Kees Vermeer was born in Noordeloos, a small village in the Dutch polder, where he acquired his first interest in birds and nature. Kees was almost ten when the Nazis invaded Holland, where at one time his family was forced to share their home with a German tank crew. He also witnessed the historic surrender of the German army in his hometown Gorinchem. In 1954, Kees immigrated to Canada, where after a few months of farming, he accepted any jobs available to him until he realized he needed more education. He enrolled at the University of British Columbia (BC) in 1956, where he obtained a Bachelor of Science degree in Geology and Zoology in 1959, and a Master of Science degree in Zoology in 1963. For his Master thesis, he studied the nesting biology of Glaucous-winged Gulls on Mandarte Island, a small rocky islet near Sidney along the BC coast. Even though his thesis was published in an obscure provincial museum series, it became a Citation Classic. Kees completed his doctorate in Zoology at the University of Alberta in 1967. As a research scientist for the Government of Canada, Kees studied the ecology of fresh water and marine bird populations. He also investigated the effects of changes in seawater temperatures; that of pesticides, mercury and oil pollution; and habitat destruction and predation on aquatic birds. Kees presently lives with his wife Rebecca in North Saanich on Vancouver Island, British Columbia. In his retirement, he enjoys bird watching, gardening, history and travel. In his eighties, he began writing short stories for his family in the Netherlands, which eventually culminated in his autobiography, Immigrant Gone to Heaven.